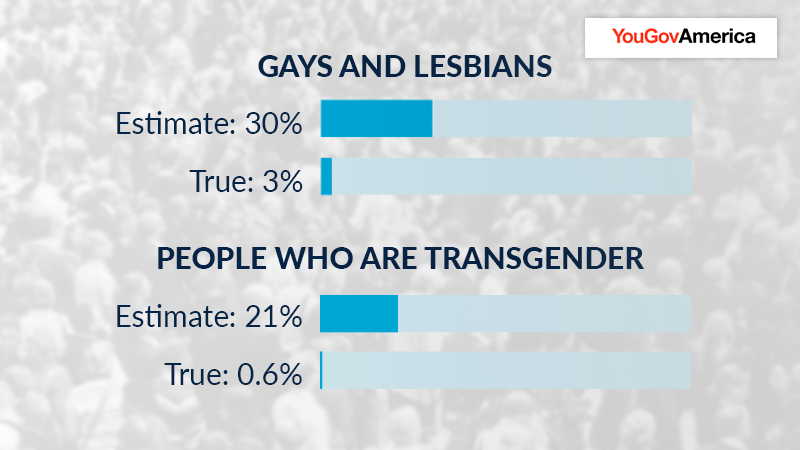 Two recent polls by YouGovAmerica show that people vastly overestimate the number of LGBT people. The US pollster asked people to guess what proportion of society various groups make up. The results show a chasm between perception and reality.

People thought there were ten times as many gays and lesbians as there actually are. When it came to transgendered people, they were exaggerated by a factor of 35. This is jaw-dropping.

The pollster concluded: “Americans tend to vastly overestimate the size of minority groups. This holds for sexual minorities, including the proportion of gays and lesbians (estimate: 30%, true 3%), bisexuals (estimate: 29%, true 4%), and people who are transgender (estimate: 21%, true 0.6%).”

Journalist Lionel Shriver blames the distorting effect of the media. It’s “not that Yanks are thick” she says, but the figures demonstrate the degree to which the mainstream media are preoccupied with “progressive” concerns.

Doubtless the same results would be seen if a similar poll was conducted in the UK.

Contrary to the impression in the media, our official ONS figures put the lesbian and gay population at 1.6% with an additional 1.1% claiming to be bisexual.

The media also like to pretend that there is huge support for same-sex marriage amongst lesbians and gays. But the ONS found only 7.6% of LGB people are in a same-sex marriage. A fact which few dare to draw attention to.

When the LGB alliance put out a tweet two years ago saying it wasn’t homophobic to oppose same-sex marriage, there was a huge row. They ended up deleting the tweet.

C4M’s own polling back in 2013 showed that LGB people were completely divided on the issue. Only 31% said they would immediately take it up if the law was changed to permit it. In fact, as the official figures show, support for same-sex marriage has been underwhelming.

It’s so important people understand the false impressions that can be created by TV dramas and reports on current affairs. No doubt many people who support traditional marriage are intimidated to keep quiet about their views because they believe they are in a tiny minority. They are not.

At C4M, we’re determined to continue to stand up for what vast numbers still think: marriage is between one man and one woman for life.