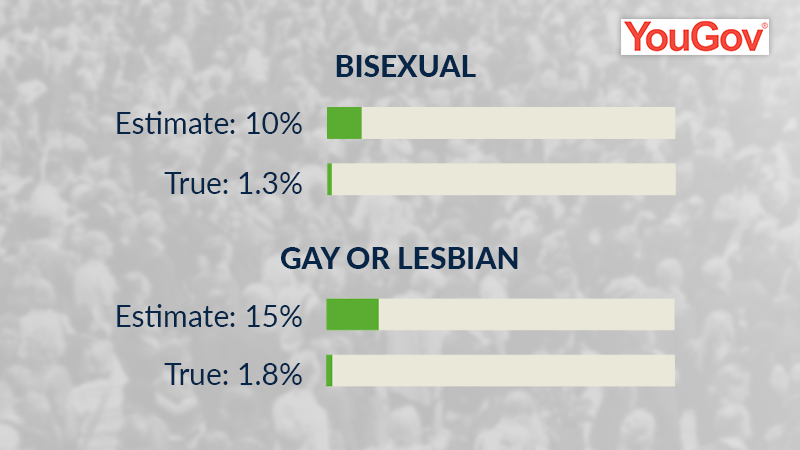 A poll has found that Brits think there are over eight times more lesbian, gay and bisexual people than there actually are, suggesting that over-representation in the media and public life may be skewing the public’s perceptions of the population.

The YouGov poll, which asked 1,800 people how large they thought different minority groups were, found that the public think 10% of people are bisexual and 15% are gay or lesbian. In reality, according to the latest official statistics, the actual proportions are 1.3% and 1.8% respectively, figures which are eight times smaller than the public’s estimates.

The poll followed a similar poll in America, which found much the same thing – the public hugely overestimate the size of minority groups.

Currently, around 3.1% of UK over-16s identify as lesbian, gay or bisexual. The proportion has been steadily increasing in recent years, particularly among young people, which researchers have suggested is driven mainly by the rise of identity politics and other sociopolitical factors.

It is still nowhere near as high as public misperceptions would put it, however. Both the massive overestimates and the growth of LGBT identities are undoubtedly a result, in part, of the preoccupation in the media, government and public life with LGBT issues and themes. Schools and family entertainment companies like Disney push LGBT concepts and narratives on ever-younger children.

Conservative MP Sir John Hayes said: “This distorted impression created by much of the broadcast and online media is so out of tune with the facts as to befuddle people about the true character of Britain… Media preoccupations with minorities are skewing the facts.”

A big danger of such false impressions is that people who support traditional marriage are intimidated to keep quiet about their views because they believe they are in a tiny minority. They are not.

At C4M, we are committed to standing up for what vast numbers still think: marriage is between one man and one woman for life.