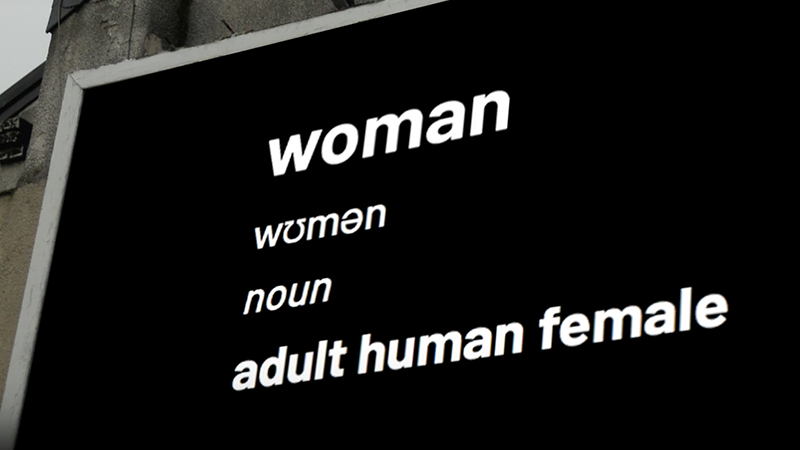 Police have arrested a 53-year-old disabled woman and raided her home, after receiving complaints that she had put up posters around Newport featuring phrases that caused offence. The phrases included “humans never change sex” and “Woman = Adult Human Female”.

According to The Times and the BBC, Jennifer Swayne accused Gwent police of acting ‘like the Stasi’ after her annotated copy of the book, ‘Transgender Children and Young People: Born in Your Own Body’, was taken in the raid. The academic book argues that the rise in transgenderism is the result of political activism, not science.

Ms Swayne, a women’s rights campaigner, told the Times she was not transphobic, had never used the word “trans” on her posters, and was only concerned about women at risk.

Upon arrest, she reportedly had to lie on her back in a police van, owing to her disability, on the way to the station. She says she was detained for over 12 hours and questioned, before being released after 3am and finding the book had been taken.

Gwent police say that the posters had “glass and pins” behind them – presumably as a disincentive to removing them. Swayne denies doing this, saying that it would have been impossible for her given that she had the use of only one arm. Whatever the truth of this particular aspect of the case, the facts currently in the public domain demand an explanation. Why was this book taken? The police could have established in a matter of seconds that it was freely available from Amazon. At least they did have stock, until the newspaper reports led to people quickly buying up the remaining copies! Will the police now force Amazon to tell them who bought copies of the book and where they live?

At C4M, we believe marriage is about one biological man and one biological woman. This is a belief protected by law. Police over-reaction to criticism of alternative views threatens to undermine our freedom to hold and express this belief. As Home Secretary Priti Patel said only last month, the police should do more to protect free speech, and spend less effort pursuing so-called “non-crime hate incidents”. There will be people in Gwent who feel less safe after the police acted in this way.